NB: This will be the last feature update to RSMfmx v1.

To better support the rust community and third parties like uMod, ChaosCode, discord and locale support I feel like it would be best to rewrite RSMfmx from the ground up to support these. RSMfmx v2 will be replacing v1 so there is no need for a new license. This will take a while. If something breaks with RSMfmx v1 I will release an update to fix it.

Getting ready for the rust update. 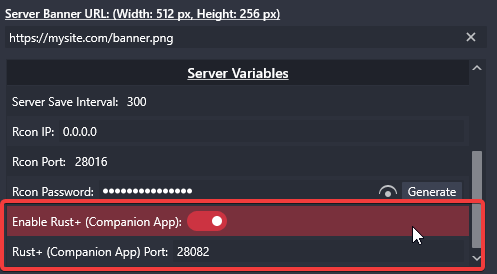 We have tested this new license system as much as we can however we cannot simulate the amount of server running RSM. I apologise in advanced if the update breaks RSM.

This update will not and cannot cause any issues to your server.

Note: If you are using the non default theme you will experience a exception error when the updater tries to close RSM. Please click okay and if the updater fails manually download RSM.

PS: Sorry for the lack of updates...

Note: The player OS and connection time is set in the PlayerDB when they join the server

Due to some security changes your anti virus might detect it as a virus. Please exclude the folder RSM is in.

After this RSMfmx update click reinstall oxide. This will install the latest version of oxide.

After this RSMfmx update click reinstall oxide. This will install a working version. The mono message will still display but only for a limited time.

Please keep in mind that your anti virus might give a false positive due to the recent security changes within RSM!
Thanks to @Giygas for help with security and compression.

The Plugin Manager has been disabled due to some saving and loading issues.

Note: The server console and chat design is not complete yet.

I started work on the server info counter (Giant bar at the bottom with static text) and should be implemented in the next update. If anyone has issues please report it in the support channel under the PRIVATE FMX category. I get notified when a post is made there and it's easier to provide faster support. Happy Christmas Everyone!